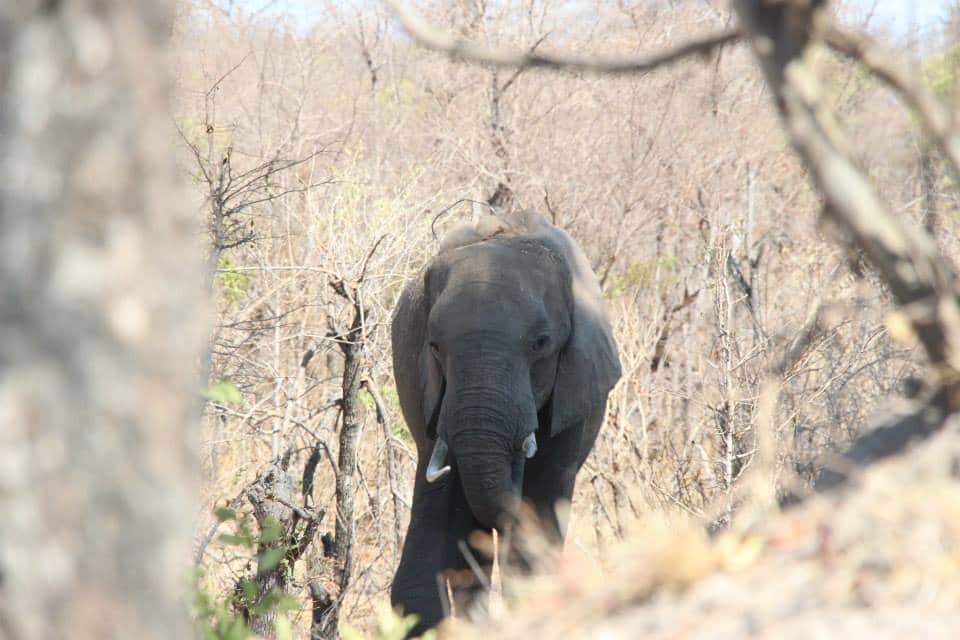 On the 5th October 2013 (at around 11h00) whilst transferring guests out of the Zambezi National Park, Pro Guide and Victoria Falls River Lodge Camp Manager, George van Wyk, spotted a young elephant bull in the Hippo River.  Nothing unusual, however, upon his return to the Lodge (about 13h00), this elephant bull was standing on the bank of the river, right out in the sun.  George instinctively knew that something was not right.  He got out of the vehicle and walked to the opposite bank, which placed him no more than 30m away from the bull.

George noticed a liquid of some sort running down the elephant’s left shoulder. The snare was hidden by the branches of a shrub, and only when the elephant moved did George see it sticking out above his head.   He could tell, by watching the young bull (estimated to be in his early 20’s), that the elephant was not in a good way and suspected that the snare was cutting into him.

Sadly the Anti-Poaching Unit was unable to respond right away.  They did however come out the next day, but the elephant had joined up with a cow herd by then and darting him at that stage was deemed too dangerous.

Despite the concerted effort of numerous individuals (tracking him on foot, searching from a variety of vehicles and even combing the landscape from above in an ultra-light aircraft!) the bull was not seen again for several days.

Then – on Thursday morning, 17th October 2013, – whilst George and Guide Shayne Hodges were en route to Victoria Falls River Lodge – Shayne spotted the bull resting under the shade of a group of large trees, next to a termite mound.

George managed to climb the mound and, upon determining that it was indeed the injured bull (easily recognizable by his tusks – of which the right is longer and the left broken), immediately sent Shayne back to the Lodge to collect this rifle & backpack whilst he stayed with the bull.  George then summonsed in some expert assistance.

Almost instantly a team of helpers descended upon the Zambezi National Park.  Roger Parry of the Wild Horizons Wildlife Trust (assisted by a volunteer from their program), Charles Brightman of the Victoria Falls Anti-Poaching Unit (VFAPU) with a number of his scouts, as well as a representative from National Parks arrived – en mass – in response to the distress call.

It did not take the Team long before the now lone elephant was darted and down.

Until this point – no-one had been aware of just how much agony the young elephant was in… The snare had cut deeply into his flesh and, in a desperate attempt to alleviate the pain, he had been continuously throwing sand onto the back of his head and neck.  The wound was badly infected.

Bolt cutters were brought into action to cut through the thick cable.  Only when they finally managed to cut all the way through the cable, which then had to be pulled through underneath him, could the very messy job of scrubbing and cleaning the horrific wound begin – with handfuls of pus and mud having to physically be pulled out from inside the wounds at times! 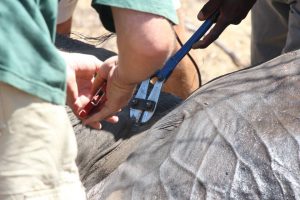 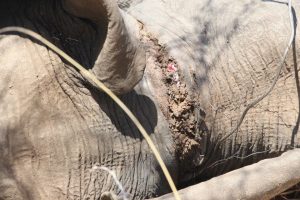 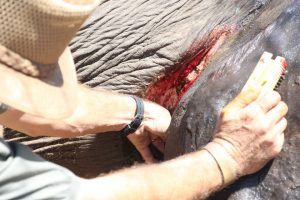 Fortunately the snare had stopped short of any major blood vessels and his trachea.

Once thoroughly cleaned Roger Parry treated the gigantic gash with copious quantities of wound spray, took blood samples and finished off by coating the injury with a liberal dose of wound powder. 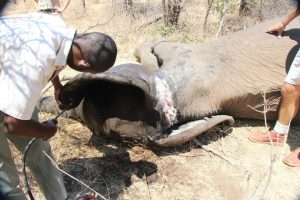 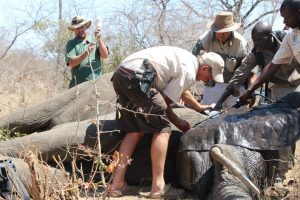 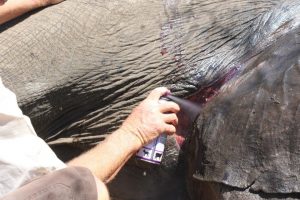 After the antidote was administered, the team retreated to the safety of a nearby termite mound and watched as the young elephant got back up on his feet.  Although a little wobbly at first, he soon disappeared into the thickets…

On the 23rd of October, a week after he was darted and treated, our elephant was spotted again – quite relaxed and clearly feeling a lot better – in the company of a group of bulls, who seemed almost protective of him… 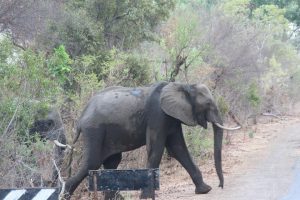 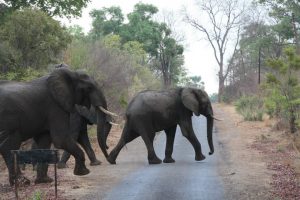 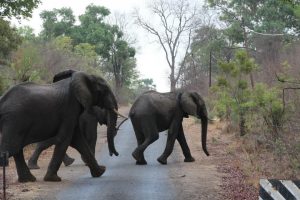 Since these photographs were taken, he has been seen several times in the area, with the herd, and seems to be doing very well!

Victoria Falls River Lodge would like to say a huge and heartfelt thank you for a great effort, by a number of dedicated people, resulting in another high point in the on-going struggle against the scourge of poaching in Africa.

Well done to all involved!