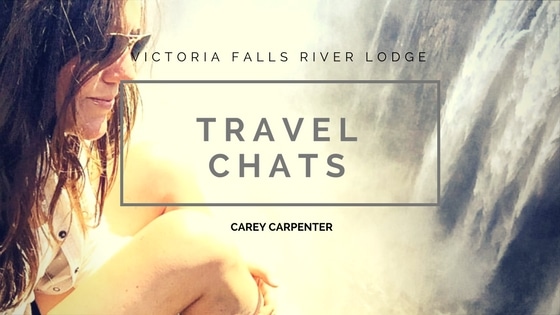 Welcome to the Victoria Falls River Lodge Travel Chats where travelers share their experiences to help you prepare for better for your next trip.

This week we speak to Carey Carpenter, an American southern bell at heart who according to her biography has been happily infected with an incurable case of wanderlust  which could be contagious

Carey Carpenter also known as Carebear is an adventurous, spontaneous travel addict who by the time of this interview had visited 57 countries. She hopes to inspire everyone to travel more.

Carebear shares some of her favorite activities as well as some tips and advice for the adrenaline junky or the first time traveler.

Why All The Travelling?

According to a 2015 New York Daily survey, on average, Americans visit only three foreign countries in their lifetime. At 57 countries and counting, we had to ask Carey, what drives her to travel so much? Travelling is her passion she says, sometimes even she wonders why she does it and she certainly doesn’t know how she does it, she expressed jokingly. She has made traveling her priority and what she loves most about it is experiencing new cultures and that’s what keeps her going.

Carey’s attitude towards travel may be described as spontaneous. To most people, choosing a travel destination isn’t as simple as seeing a photo on Instagram and deciding, Wow! I gotta go there. Yet that is exactly how Carey chooses her travel destinations.

Sometimes she finds herself in places she never planned to visit. Victoria Falls was one of those destinations for her.

Carey visited Victoria Falls, around August 2016. Although Victoria Falls is a destination one can visit all year round, Carey thinks August was the perfect time for her because it wasn’t extremely hot or cold and the temperatures were perfect, hovering just above 72°F (22-23°C)

Despite a little chill during the morning safari, Carey thought the weather was great because it was the kind of weather where you could wear either shorts or long pants without a problem.

In a nutshell, Victoria Falls weather can be summarized as follows:

For month to month weather details visit the weather channel.

Listen To The Full Interview

Carebear found herself at the Victoria Falls on a whim, after a Visit to the Southern Parts of Africa. She was flying down to Zanzibar then Cape Town when she made the decision to Visit Victoria Falls as she needed a couple of days in the interim. When she floated the idea of Victoria Falls to her travel friends who had been to there, they all strongly suggested she visits the place.

The Art of Packing

Carebear visited the Victoria Falls in August, which was the perfect time for her in terms of the weather. Carebear described the weather as, not overly hot or cold, though slightly chilly in the morning.  The morning game drives where made comfortable through the provision of blankets by The Victoria Falls River Lodge.

The enthusiastic and spontaneous traveller packed her everyday clothes; jeans, shorts, t-shirts and light jackets which she found perfect for the African Spring weather.

Travelling between Zambia and Zimbabwe requires a visa for an International traveller. She describes it as confusing and suggests that it would be better to travel to the Zimbabwean side of the falls.

As a big adventurist, the Gorge swing was still a challenge for her, it pushed her out of her comfort zone. It was nothing like any other super sports she’d ever participated in. The prep work wasn’t what she expected, she had to take a leap and just jump. A decision she is happy she made.

Carebear was impressed by the fact that Zimbabwe is a multi-currency state. Using US$ was convenient, it made life and planning a walk in the park. In addition to the economy factors he management staff was exceptional. She was amazed and totally taken aback by how kind the staff where. Life was at ease, she was pampered and catered to. Her need where made a priority by the Victoria Falls River Lodge staff she describes as delightful.

Carebear concluded by telling us all that when you travel, remember, “It’s not right, it’s not wrong, it’s just different”. Keep your wits about you and you will be alright.