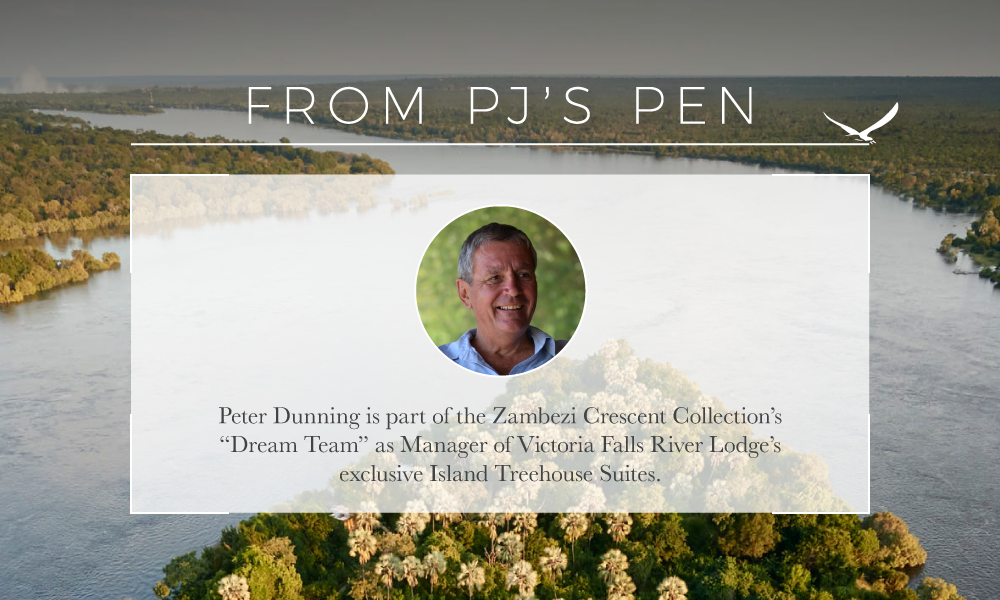 On November 2 the first rain since 11 April finally fell on the Island, and what a blessed relief it was too. The ambient temperature dropped immediately, after nearly a month of extreme heat which has made us all feel somewhat weary.

The effects were almost instantaneous; within a day or two we had an explosion of dragonflies here, whilst on the mainland the first birth cycle of the rainy season was of chongololos, appearing in their hundreds. In the Chewa language of Zambia, chongololo means millipede, and the word is now used throughout Southern Africa to describe these harmless creatures.

The big news of the month was the birth of mongoose babies, somewhere around the 18th.

The adults cleverly chose an overturned steel fire bowl underneath the walkway as their den. It has a very small entrance which ought to be easily defended against predators. The babies usually start to leave the den site on short foraging expeditions under adult supervision at about a month old.

There is a fine specimen of Gardenia Volkensii just to the right of the door to Treehouse 4. This tree also comes into flower at this time of year, and they have a delicate but beautiful scent early in the mornings.

Then, on the mornings of November 10 and 11, the Fireballs suddenly appeared all over the Island. These lilies grow from a rhizome and grow most often at the base of Ilala Palms and on termite mounds. Their Latin name is Scadoxus Multitiflores, and they bring an amazing flash of colour to the bare brown earth.  It is certainly another of nature’s endless wonderful mysteries that they engineer this synchronous emergence, surely the result of a complex mix of temperature, moisture and who knows what else? They contain toxic alkaloids which render them very poisonous to browsers and grazers.

November is the month when Leadwood Trees (Combretum Imberbe) come into flower. They like to grow along watercourses, and there are many Leadwoods between the rooms and walkways of River Lodge.

As the name suggests, the wood is extremely dense and heavy and burns with intense heat. The flowers are yellow-white and give off a most beautiful fragrance even when carpeting the ground.

On the morning of November 3, I found a very small dead baby elephant floating in the river at the downstream end of the Island. A large herd had swum across from the Zambian bank at around midnight. There was no moon and plenty of cloud cover that night, and I can only assume that the baby somehow become separated from its mother during the crossing and drowned. The crocodiles were gathering, and by lunchtime, the carcass had been dragged downriver and presumably dismembered.

The rainy season is, of course, a time of abundance for virtually every creature in nature. In the evenings now, many Common Dwarf Geckos (Lygodactylus capensis capensis) gather on the glass of the large piece of art on the top level of the deck. They happily feast on all manner of tiny flying bugs that are drawn to the light next to the picture.

On the night of November 8, we had a surprise visit from 8 Cape Buffalo who had presumably waded across from the Zimbabwe bank. They stayed for a night and a day and moved off, not to be seen again. It was a stark reminder that it is never a good idea to walk around the Island off of the elevated walkways at this time of year.  We also had two very fine Kudu bulls in a temporary residence, and one of them posed most elegantly for me as I arrived to work a few days ago.

Every November also brings the anniversary of the first white person to see the Victoria Falls, David Livingstone. He spent the night of 15th November 1855 on Kalai Island a few kilometres upstream of the Falls, having come down the river by foot, and the next morning he was paddled out by the local villagers in a small canoe to approach the thundering smoke. He landed on the biggest island on the lip of the Falls, now called Livingstone Island, and from there obtained his first view of the Falls.

Kalai Island is now classified as a Zambian island and is clearly visible a few hundred meters from our bar. The words in his diary are worthy of quotation all this time later:

“Creeping with awe to the verge, I peered down into a large rent which had been made from bank to bank of the broad Zambezi, and saw that a stream of a thousand yards broad leaped down a hundred feet and then became suddenly compressed into a space of fifteen to twenty yards….the most wonderful sight I had witnessed in Africa.”

The Zambezi River usually bottoms out and begins its slow rise again some time in November every year.  In 2018 low water was on 15 November at 177 cubic meters per second.

This year the river turned sometime between 12 and 18 November, and the volume on 12 November was 183 cubic meters per second. Our boat jetty has a hinged walkway and it now requires considerable effort to climb up it, particularly when carrying guest luggage.

On May 16 last year at high water the top of the walkway was level with the river, as hard as it is to imagine now. 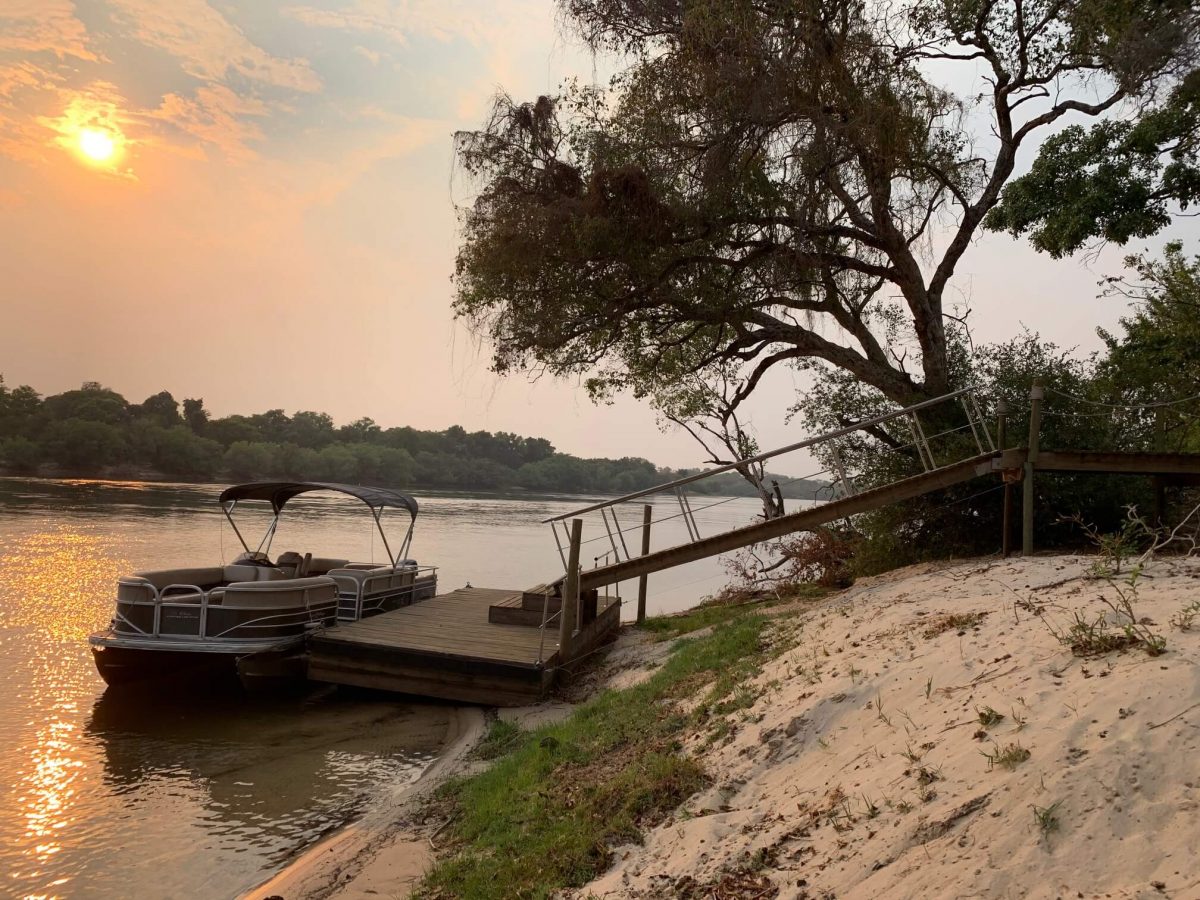 I have talked before of the importance of the Ilala Palms on the island as a food source for many animals. For the past few nights, I have had my camera trap attached to one of the poles that hold the upstairs bar up, and the results speak eloquently for themselves. 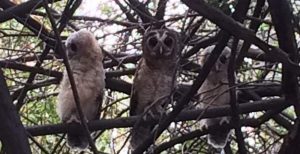 Finally, we have three baby Wood Owlets on the Island. Zenzo saw them first, perched in a big tree overhanging the walkway between rooms 4 and 5.

We finished November with 37.5mm of rain. This compares favourably with the monthly totals for 2017 and 2018. We need much, much, more, and soon.