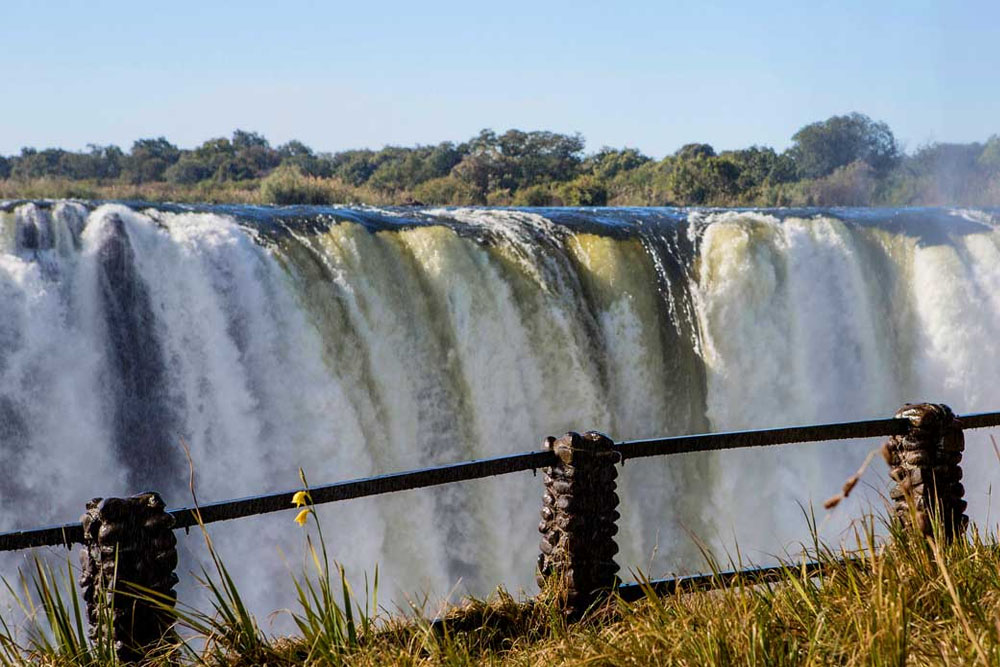 There has been a great deal of chatter on social media about the status of the Zambezi this year.

There is some wild talk about the projected high-water mark in 2020 potentially exceeding the legendary “once in a thousand years” flood of 1958.

It is interesting to note that this mark is still painted on the old tea-room here on Kandahar Island, and I think it’s the only place in Zimbabwe where it was recorded and is still visible.

In the interests of clarity and historical perspective, here are some facts about where we are now, and what might be ahead. All but one of the numbers have come off the Zambezi River Authority website. They record the level at four places along the river as far as The Big Tree, and they update the website every week. I have no reason to doubt the veracity of their records, and I do not know of any other source that might be more accurate.

The highest ever recorded volume of the Zambezi at Victoria Falls was 11,800 m3/s on March 8th, 1958. I got this number from a scientific paper entitled “Understanding Extreme Floods in the Lower Zambezi Basin” by Richard Beilfuss, published in July 2005.

Another famous high-water mark occurred in 1978 and this volume was recorded as 6,200 m3/s.

The 2018/19 season produced very poor rains both locally and upstream of us. On 8 May 2019 the river peaked at 1,175 m3/s. This was described as a 23-year low and generated very negative publicity driven by international media.

So right now, we are at 91% of the highest level recorded in 2018, a ten-year high. However, we are six weeks away from the date of that record, and a lot can happen in six weeks.

The great unknown and unmeasured is the amount of water still stored in the giant sponge of the Barotse Plains in Western Zambia. I have also read that a second, smaller reservoir lies in the Chobe river system.

In our part of the world, the rainy season traditionally finishes at the end of March. The reason that the annual river volume at Victoria Falls generally peaks much later is that once the sponge is full, it starts to release water back into the main river and this takes time to get to us.

One of the chief anomalies which contributed to the awesome flood of 1958 was a massive amount of local rain between Katima Mlilo and Victoria Falls. Larry Cummings, who has lived in this area for many years told me that on his ranch they recorded 48” of rain in the 1967/58 season. This is almost exactly double the seasonal long-term annual average. We have only received 450mm (18”) of rain on the island thus far this season, about 85% of the average. This is highly unlikely to change now to any significant degree.

As things stand right now, the volume of the Zambezi going over the waterfall is only 36% of the greatest flood ever recorded. What does nature have in store for us as the year of the virus unfolds?