Nestled on the banks of the mighty Zambezi River, within the Zambezi National Park, Victoria Falls River Lodge offers wonderful wildlife viewing opportunities and easy access to the historic town of Victoria Falls and the opportunity to visit the world-famous Falls and explore this incredible natural wonder on foot.

The Smoke that thunders – victoria falls

The falls are believed to be the largest in the world in terms of the volume of water that flows over them.

The Victoria Falls or (Tokaleya Tonga: the Smoke that Thunders) is a waterfall located on the Zambezi River between the countries of Zambia and Zimbabwe.  The Falls are believed to be the largest in the world in terms of the volume of water that flows over them.

These ancient, and truly spectacular falls were first made known to the outside world in 1855 by Scottish explorer extraordinaire, Dr. David Livingstone. Livingstone had been attempting to find a route to the East Coast of the African continent.  Travelling south-east from Luanda to Sesheke, he encountered this most magnificent waterfall and renamed it The Victoria Falls after the British Monarch, Queen Victoria.  Livingstone was led to The Falls by the Makalolo tribe’s people in a dug-out canoe.

Soon after Livingstone’s reports about the Victoria Falls spread across borders, The Falls began to attract Anglo traders.  A rustic trading settlement was set-up on what is now the Zambian riverbank and became the original Victoria Falls town called Old Drift.  The number of foreign visitors rose steadily and people walked, rode on horseback or travelled by ox-wagon from the Transvaal in South Africa to view The Falls.  Malaria began to take its toll on the settlement and at the turn of the century, Old Drift was shifted to the site of the present-day town of Livingstone in Zambia.

There are two islands on the crest of The Falls that are large enough to divide the curtain of water even at full flood: Boaruka Island (or Cataract Island) nearest the western bank and Livingstone Island near the middle—the point from which Livingstone first viewed The Falls.

The Zambezi River, upstream from The Falls, experiences its rainy season between late November and early April. The river’s annual flood season is from February to May, peaking in April.  The spray from The Falls typically rises to a height of over 400 metres (1,300 ft), sometimes even twice as high, and is visible from up to 48 km (30 mi) away.

During the flood season, it is impossible to see either the foot of The Falls or most of its face and the walks in the Rainforest along the cliff opposite it are in a constant shower and shrouded in mist.  However, as the dry season takes effect, the islets on the crest become wider and more numerous, and in September to January up to half of the rocky face of The Falls may become dry.  It’s during this time that the bottom of the First Gorge can be seen along most of its length. 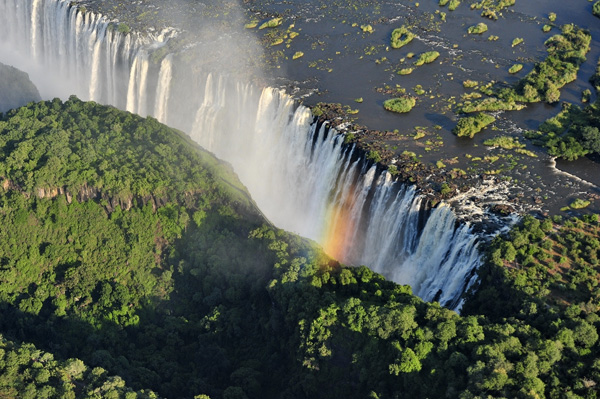 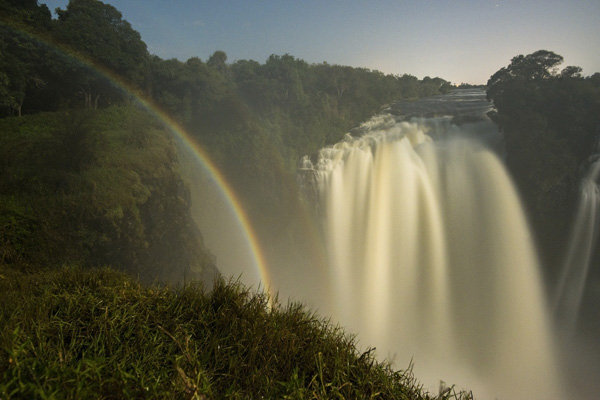 A Luxury 5 star lodge situated within an African game park and in close proximity to the magnificent Victoria Falls, one of the 7 natural wonders of the world.

Learn More About What Makes Us Unique

The best way to experience the Zambezi National Park is during the Lodge’s Game Drives (included in the accommodation fee) and/or on foot on a Guided Bush Walk (the latter may be arranged at an additional cost). There are several picnic sites along the Zambezi River wherefrom day visitors to the Park may fish as well.

The game drives in the park follow extensive networks of roads along the river. These roads are accessible and controlled through the main gate of the Park. There are also a several picnic sites along the Zambezi River which visitors can fish from as well.

Most of the Zambezi National Park consists of Mopane Woodland with a thin strip of Riverine Bush along the edge of the river. A wide variety of larger mammals may be found within the Zambezi National Park including elephant, lion, buffalo and leopard. In addition, herds of sable antelope, eland, zebra, giraffe, kudu, waterbuck and impala, as well as many of the smaller species of game, can be viewed.

The Zambezi River is also home to over 75 species of fish and is famous for its bream and fighting tiger fish.

Book Your All-Inclusive dream Vacation with Us Now

We will assist you through our simple reservation process and make sure that you have all of the information that you need. We will always be clear about what is included in our packages so that you know exactly what to expect.